Nuevo Imparcial.- When the New Orleans Steamboat Company launched the NATCHEZ in 1975, they revived more than a famous name. They created one of only two true steam powered sternwheelers plying the Mississippi today. The NATCHEZ combines the best of contemporary construction, safety, and comfort standards with all the authenticity and style of her classic steamboat gothic predecessors.

The NATCHEZ resembles the old sternwheelers VIRGINIA and HUDSON in her profile and layout. Her powerful steam engines were built for U.S. Steel Corporation’s sternwheeler CLAIRTON in 1925. Her genuine copper and steel steam whistle is a treasured antique. Her copper bell, smelted from 250 silver dollars to produce a purer tone, once graced the S.S. J.D. AYRES. Her 32 note steam calliope was custom crafted and modeled after the music makers of the Gilded Age. 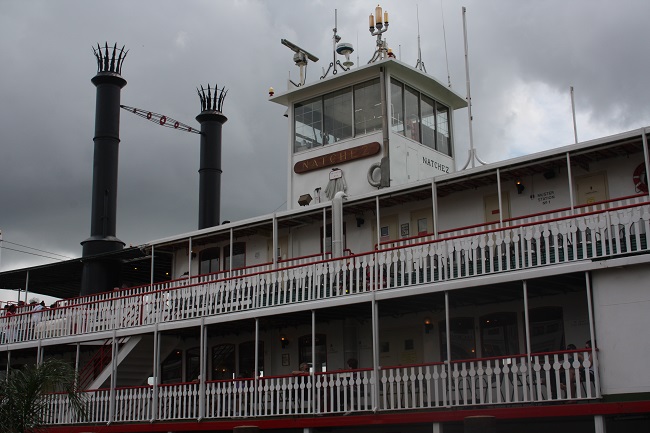 The NATCHEZ is the pride of the Mississippi River and is as beautiful as any of her namesakes. Many of her crew have been with her since her maiden voyage. Theirs is a whole new chapter in history of the river, and you can be a part of it. Her daily two-hour jazz cruises depart from the Toulouse St. Wharf (behind JAX Brewery in the French Quarter) at 11:30 A.M.; 2:30 P.M.; and 7:00 P.M. 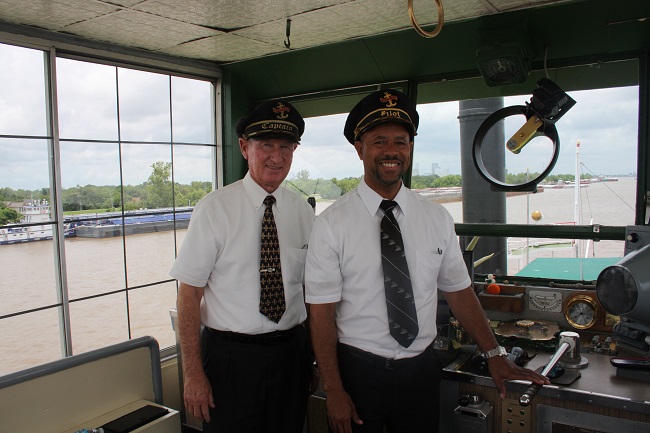 True to tradition in every detail, boarding the NATCHEZ makes you feel as if you have entered another era. The captain barks his orders through an old-time hand-held megaphone. The calliope trills a melody into the air while the great wheel, 25 tons of white oak, churns the heavy waters of the Mississippi. You soon find yourself slipping into a sense of the old, vast and timeless river.

As the NATCHEZ glides past the French Quarter and through one of the world’s most active ports, you begin to understand the magic of the experience. For all its history and romance, the excitement of riding a steamboat is as real and rich and genuine now as it was a century ago.» 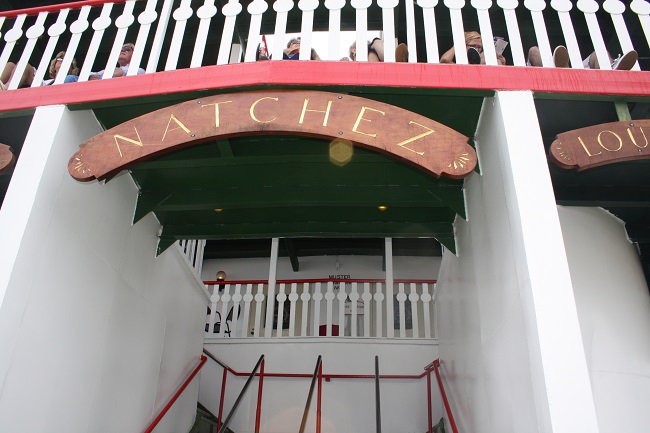 She’s the ninth steamer to bear the name NATCHEZ. It was her predecessor, NATCHEZ VI, that raced the ROBERT E. LEE in the most famous steamboat race of all time. Even today, the NATCHEZ is proudly the undisputed champion of the Mississippi, never having been beaten in a race. In many ways, she’s the best of her line. 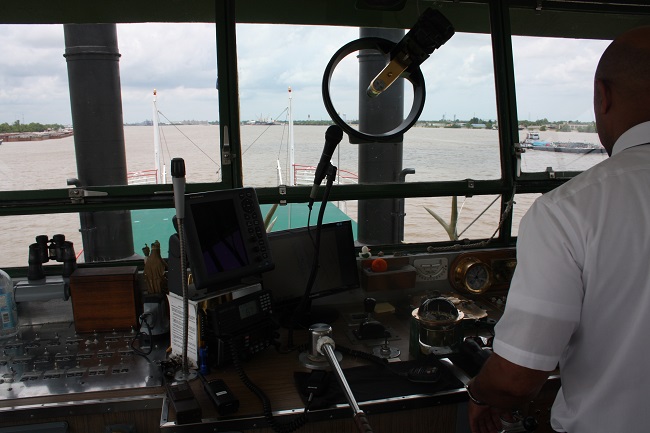 It’s a line that follows the course of river history, from the placid antebellum plantation era through the turbulence of the Civil War to the Gay Nineties, and, ultimately, the new millenium. 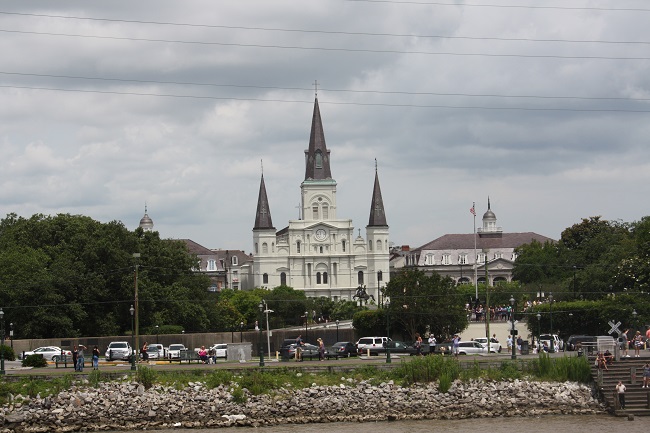 Steamboat Races are as old as steamboats themselves. The history of the Natchez boats from the first to the ninth in the lineage includes many steamboat races. The latest race took place on Valentine’s Day 2003 with the Natchez paired against the American Queen Steamboat, one of the fleet of the Delta Queen Steamboat Company. It was a charity race with proceeds going toward the renovation of St. Louis Cathedral in New Orleans.

At this time there is not a date set for the next race, but please check for updates later in the year! 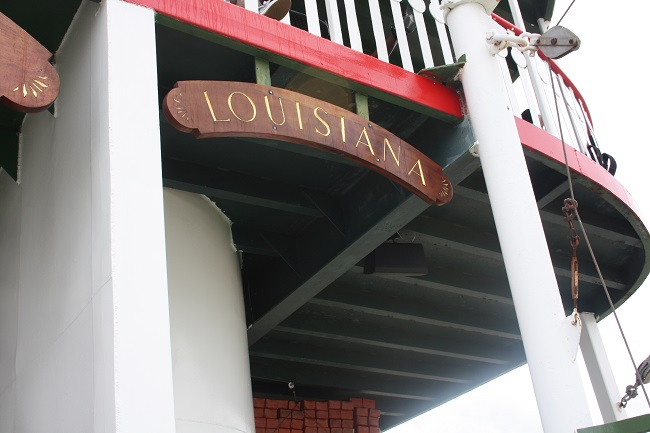 What could be more romantic than expressing your love aboard the authentic Steamboat NATCHEZ as the sun sets on the Mighty Mississippi? Let our experienced staff attend to your every need and make all of your dreams of a wonderful wedding come true. Officiate references available upon request. For additional information or services including entertainment, transportation, photography, flowers, and cakes, or to make reservations, contact a Wedding Consultant at 1-800-365-2628 ext. 431, or 504-569-1431 or email: weddings@neworleanssteamboat.com. 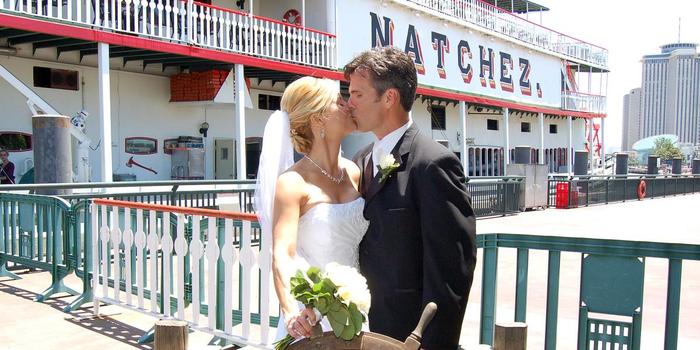 Your two-hour cruise from the heart of the French Quarter shows you why the city was founded on the beautiful crescent of the lower Mississippi River. Let us show you New Orleans, one of the world’s most active ports, as it can best be seen from the river aboard New Orleans’ only authentic Steamboat…The Steamboat NATCHEZ. 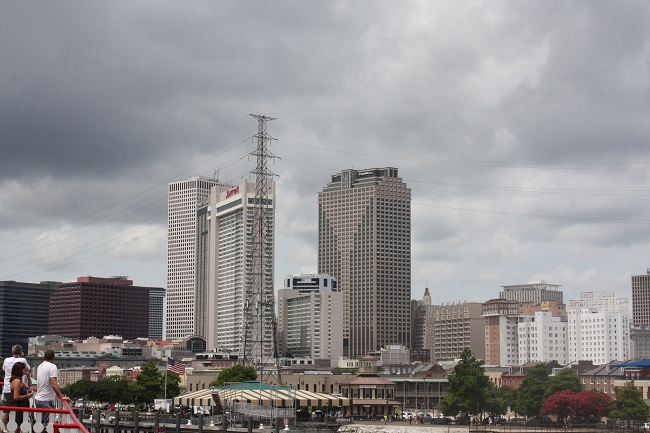 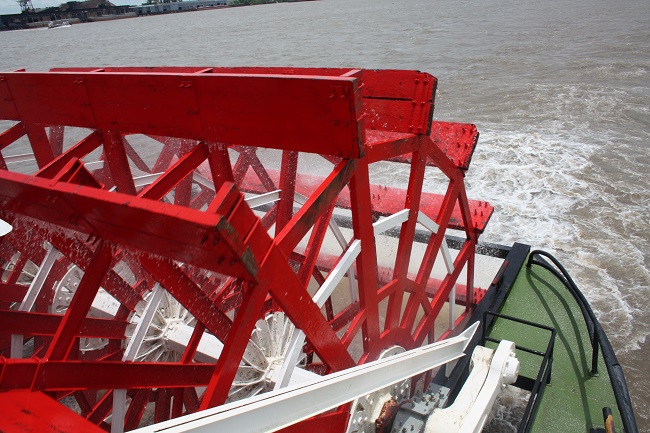 The steam engines were built for the Steamer CLAIRTON, once part of the U.S. Steel Corporation’s towing fleet on the Kanawha River in West Virginia. She pushed steel and coal until the modernization of diesel engines made even the most powerful steam machinery obsolete. The CLAIRTON was purchased by the New Orleans Steamboat Company in 1974 and towed to Louisiana, where her four engines (2,000 hp total) and steering gear were transferred to the Steamboat NATCHEZ.

Bill Dow, whose family owned the Lake George Steamboat Company, came down from New York to attend a dry docking seminar in Mobile, AL. Afterward, instead of flying home, he was pulled to visit New Orleans, a city he’d never visited. Bill walked out to the Mississippi River and saw the dilapidated Toulouse Street wharf, a disappointment considering the early days of this port city. Bill found the nearest payphone and called his father Wilbur E. Dow, Jr. , who was worried sick about his whereabouts, and said, “Dad, we need to put a steamboat here!” The Dows were truly the pioneers of riverfront development in New Orleans.

Construction of the NATCHEZ 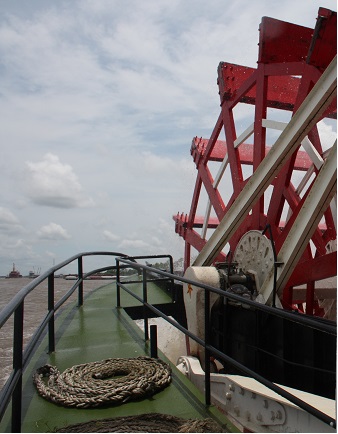 The Steamboat NATCHEZ was built at Bergeron Shipyard in Braithwaite, Louisiana about 20 miles downriver from New Orleans. One journalist who visited the shipyard during construction wrote, “The most striking and instantly visible attraction of the NATCHEZ is her beauty. Rolled steel has been fitted to give the hull and decks more sheer and camber than that of the BELLE OF LOUISVILLE. Passengers will actually feel this graceful design under their feet as they walk about.”

In April the NATCHEZ competed in her first steamboat race against the Delta Queen as a fund raising event to benefit restoration of St. Louis Cathedral. A marble plaque in the Cathedral lists the NATCHEZ as a patron. She easily won the race and earned her Antlers, a traditional trophy of steamboat races since the 1850s. The NATCHEZ has since raced the AMERICAN QUEEN, MISSISSIPPI QUEEN, PRESIDENT, BELLE OF LOUISVILLE and the diesel powered BELLE OF CINCINNATI and CREOLE QUEEN …and has never given up her antlers. As the saying goes, “No one matches the NATCHEZ!”

President Ford Campaigns Aboard the NATCHEZ 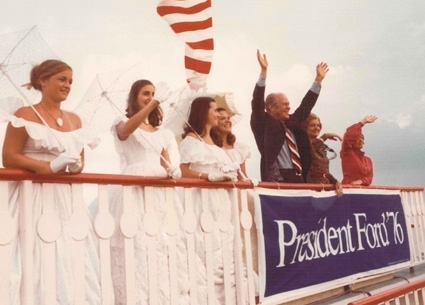 U.S. President Gerald Ford and First Lady Betty enjoyed a weekend river jaunt aboard the Steamboat NATCHEZ, stopping at three cities to campaign for reelection. Their campaign tour ended with a public address in Jackson Square.

When the NATCHEZ was built, the U.S. Coast Guard mandated that the main dining room be divided into three rooms separated by firewalls. Each parlor was appointed with different décor. The boat was renovated in 1978 and the walls were removed, allowing for one long, elegant cabin. 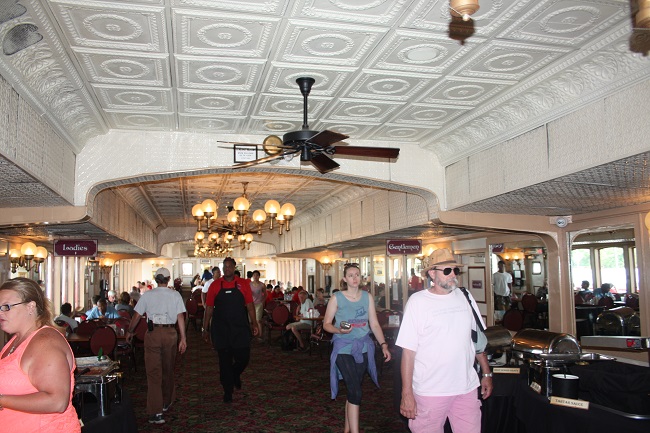 The riverfront infrastructure and new hotels that were built for the 1984 World’s Fair paved the way for a boom in tourism and future investment. During the opening of the 5,400 seat amphitheater, the NATCHEZ arrived with guest of honor Bob Hope, whose 81st birthday was part of the celebration.

New Orleans hosted the Republican National Convention. The opening event was held in Spanish Plaza along the riverfront and the GOP candidate George H.W. Bush arrived at the welcome rally aboard the Steamboat NATCHEZ, along with his son, future US President George W. Bush. 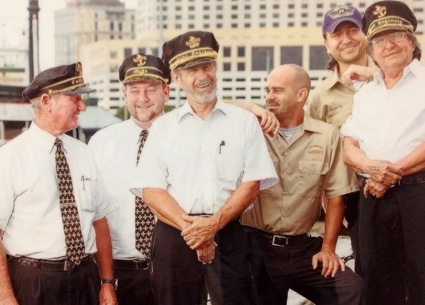 Following in his father’s footsteps, Juan Mendivil, Jr. came to work aboard the Steamboat NATCHEZ, continuing the riverboat traditions that are passed from father to son. Today Juan Sr. is a Chief Engineer and Juan Jr. is a Fireman. Scotty Vieages, Jr., who joined the crew in 1995, is also a Fireman whose father is a Chief Engineer. Master Captain Steve Nicoulin, Sr.’s son came to work for the company in 2003 and Steve Jr. is now a pilot and captain himself. 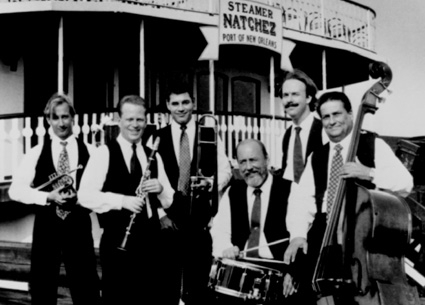 The six piece Grammy nominated Dukes of Dixieland, began playing on board the NATCHEZ .The Dukes continue to entertain as the house band for all dinner jazz cruises and private charters. When the steamboat goes into annual layup, the Dukes share New Orleans music by performing with symphonies and at festivals around the world.

Gordon Stevens became President and CEO of New Orleans Steamboat Company. He joined the company in 1976 as Controller and became General Manager in 1978.

Do You Know What It Means To Miss New Orleans?

As the region focused on recovery from Hurricane Katrina (Aug. 29, 2005), tourism dropped and the company downsized significantly. As part of The Great River Relief Tour, the NATCHEZ embarked on a “tramping trip,” stopping at cities along the Mississippi River for passenger excursions. This was an important statement to company employees, the riverboat community and the country that the Steamboat NATCHEZ and New Orleans were resilient and would thrive again.

Tall Stacks in the Queen City 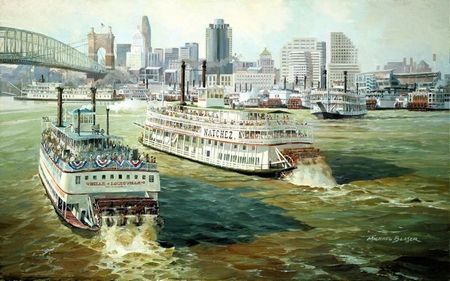 Still reeling in the aftermath of Katrina, The NATCHEZ steamed upriver to Cincinnati, the Queen City, to partake in the Tall Stacks Riverboat Festival. As a first time participant and one of three steam powered vessels offering excursions, she truly was the belle of the ball. In a 5 day period, she sold out almost every cruise she offered and carried a total of 12,834 passengers! (Official Tall Stacks 2006 Poster. Artwork used with permission of Michael Blaser.)

A Winning Season – For the Saints and New Orleans Tourism

In spite of the recovery of all tourist areas, New Orleans continued to suffer from a negative public image. The New Orleans Steamboat Company experienced the five most difficult years in company history. In a Saints season that began with 11 undefeated games and ended with New Orleans winning its first Super Bowl, the nation rallied behind an undeniably recovered New Orleans. The page had been turned. 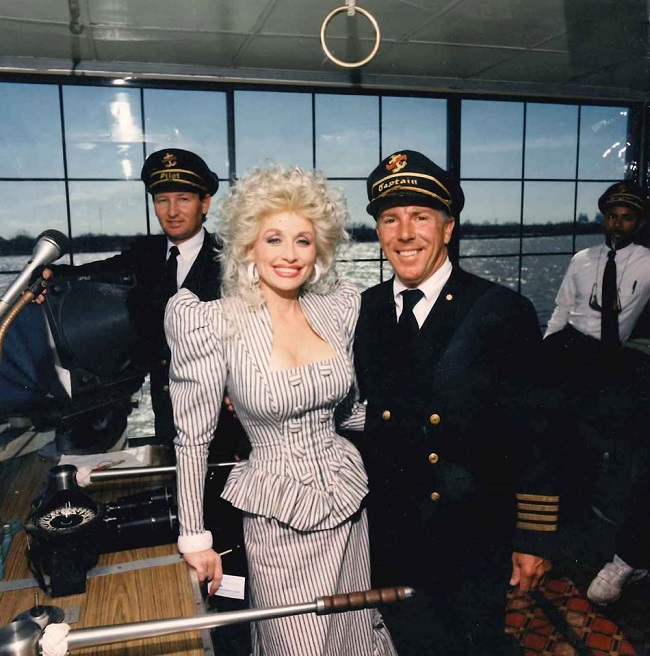 40 Years on the Mighty Mississippi

In 2015, as the Steamboat NATCHEZ celebrates her 40th Anniversary, the New Orleans Steamboat Company is thriving. The Steamboat NATCHEZ carried 332,000 passengers in 2014 and its sister company Gray Line New Orleans carried an additional 106,000. Together they employ 207 employees. For the last three years the NATCHEZ has received TripAdvisor’s “Certificate of Excellence.” CEO Gordon Stevens says, “We believe that, with the finest crew on the River, excellent food and beverage service and a great sales and support staff, the Steamboat NATCHEZ is poised for 40 more wonderful years recreating part of our American Heritage – the Steamboat Era!” 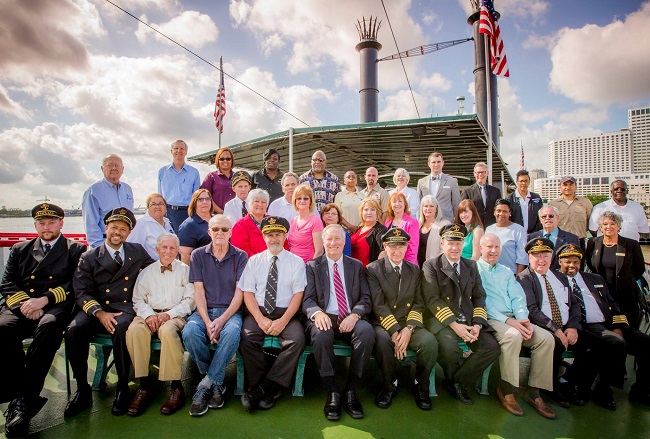 We love this group photo that we took to commemorate the anniversary! We have all Gray Line and Natchez employees that have been here for 10 years or more in this photo, with the exception of a few who could not make it. A big thank you to all and may we have many more successful years together! 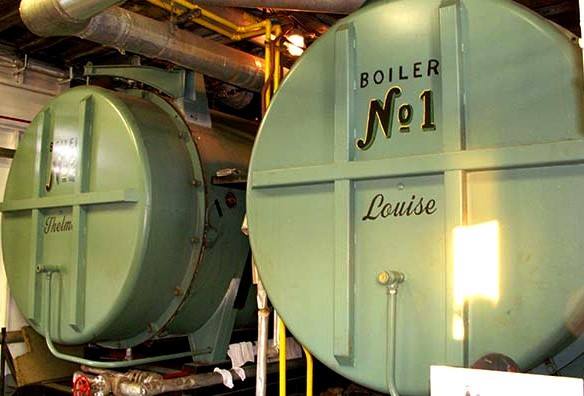 Fact 29: It was a tradition for engineers to name the boilers. Ours are called Thelma & Louise! They produce a steam pressure of 210 lbs. per square inch and are fed by #2 diesel oil. 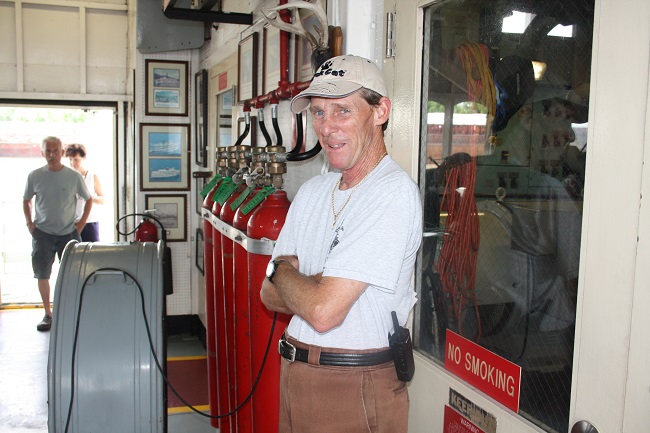 Come aboard and let   us show you hospitality  ....Steamboat Style! 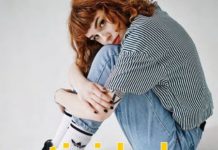 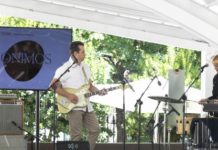 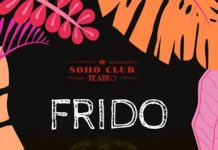