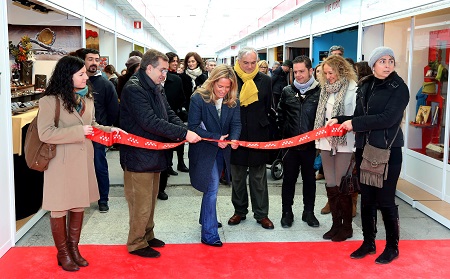 Nuevo Imparcial.- Madrid hosts the Craft Fair until January 5th at the Plaza of Spain. The Deputy Minister for Innovation, Industry, Commerce and Consumer Affairs, Dew Albert, accompanied by the Director General of Trade, Angel Luis Martín and the manager of the Chamber of Commerce and Industry of Madrid director Miguel Garrido, yesterday inaugurated the XXVII Craft Fair of the Community of Madrid. The Craft Fair of Madrid is the most important act of promoting Madrid crafts, constituting the main Fair of this type in Spain. For crafts, both regionally and nationally, this show is a key commercial reference ,due to the diversity of crafts and products represented in it and mainly by the uniqueness of what is offered and its different nature which also helps to provide the Community of Madrid with a major touristic attraction in the Christmas season.

The Craft Fair is held until next January 5th 2015 and is open from 11.00 to 21.00 hours, except on the 24th and 31st December when it will run until 15.00 and it will be closed on December 25th and January 1st. It is expected that this year will exceed 200,000 visitors. It will involve 170 craft workshops, 124 from 46 municipalities in the Madrid region and 46 from the other 13 Autonomous Communities (Andalucía, Aragón, Asturias, Castilla-La Mancha, Castilla y León, Catalonia, Valencia, Extremadura, Galicia, Islands Baleares, Murcia, Navarra and the Basque Country).

Spreading the work of artisans

The crafts sector, with nearly 100 offices institutionally recognized, in our region represents 12.5% of nationally employed craftsman. It is the third Autonomous Region in terms of craft occupation, generating self-employment of 27.2% and a concentration of 8,205 artisan companies, according to the latest data released by the Ministry of Industry, Tourism and Trade. In addition to initiatives such as the celebration of the Craft Fair which celebrates its XXVII edition, the Ministry of Finance launched in 2012 the program «Craft is More» to encourage awareness of the crafts and enhance the marketing of their products. Within this program they have developed a number of initiatives to reassess the perception of Crafts, spreading the cultural and economic value of this activity, boosting international presence and to enhance the opening of new channels for the marketing of craft products.